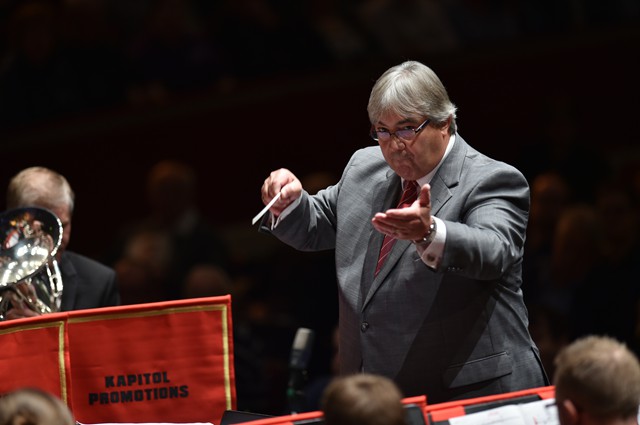 A proud Welshman, Robert Childs was born in Crickhowell in 1957 and was introduced to music at an early age by his father, John, a coal miner and euphonium player.

​Having left school to begin a mechanical apprenticeship at Ebbw Vale Steelworks at the age of 15, by the time Robert was 19, he was married to the love of his life, Lorraine, and was playing with the famous Grimethorpe Colliery Band under the baton of the legendary Elgar Howarth. On his arrival in Yorkshire, Elgar Howarth recalls:

​"Robert Childs arrived at Grimethorpe as a teenage virtuoso and matured to become master of his trade. He is a stunning example of what can be achieved by natural talent allied to open-mindedness, hard work and intelligence."

​During his time at Grimethorpe, Robert premiered Golland’s Euphonium Concerto at Sydney Opera House, was voted International Euphonium Player of the Year, and secured his first teaching post at the University of Salford. His reputation as a soloist and brass teacher quickly led to simultaneous posts at other universities, all whilst continuing his day job as an engineer and being a loving Dad to his children, Lisa and David.

In the years that followed, Robert toured the world as soloist and educator, performing at prestigious venues and delivering master classes at leading conservatoires. He also formed a musical partnership with his euphonium-playing brother, Nicholas, and together made their debut as the Childs Brothers at the Royal Albert Hall in 1985. Nick revealed:

​"I've only had two teachers, my father and my brother. As the Childs Brothers it was always good to know that when I entered the stage and the lights came on, Bob was by my side. He's a fantastic musician, friend and brother."

​Robert later became principal euphonium and associate conductor of Black Dyke Band, and it was during this time that he cemented his position as one of the world’s leading euphonium soloists, and developed his reputation as a conductor, working with the likes of Evelyn Glennie, Lesley Garrett and Lady Susannah Walton.

​By now his career had moved from engineering to music, and having left school at an early age, Robert decided to educate himself as a mature student, gaining a Master’s Degree in Advanced Musicology from The University of Leeds, a Post Graduate Certificate in Education from the Open University, and a Doctorate in Musical Arts from the University of Salford.

​In 2000 he returned to Wales when he was appointed Musical Director of Cory Band. At the time Cory was ranked 13th in the World, but Robert made an immediate impact, and with more than 20 contest victories, including a World Championship, a hat trick of European titles and five British Opens, he led the band to its current position of No.1 in the World, and whilst doing so, broke new ground artistically through commissions, recordings and high profile collaborations.

​His remarkable achievements were recognised by the Worshipful Company of Musicians when he was awarded the prestigious Iles Silver Medal in 2007, before receiving ‘Freedom of the City of London’ and the Welsh Music Guild’s prestigious John Edwards Memorial Award for outstanding contribution to Welsh Music in 2008.

"Robert Childs is a master euphonium player, and a wonderful conductor and musician. He is also one of the warmest and wisest people in the world of brass. A consummate professional and real gentleman."

Robert is a long-serving Besson clinician, an Honorary Fellow of the Royal Welsh College of Music and Drama and continues to work with many of the world's finest bands. As a founding tutor and Director of the Brass Band Summer School, we are especially delighted that he joins us this year.