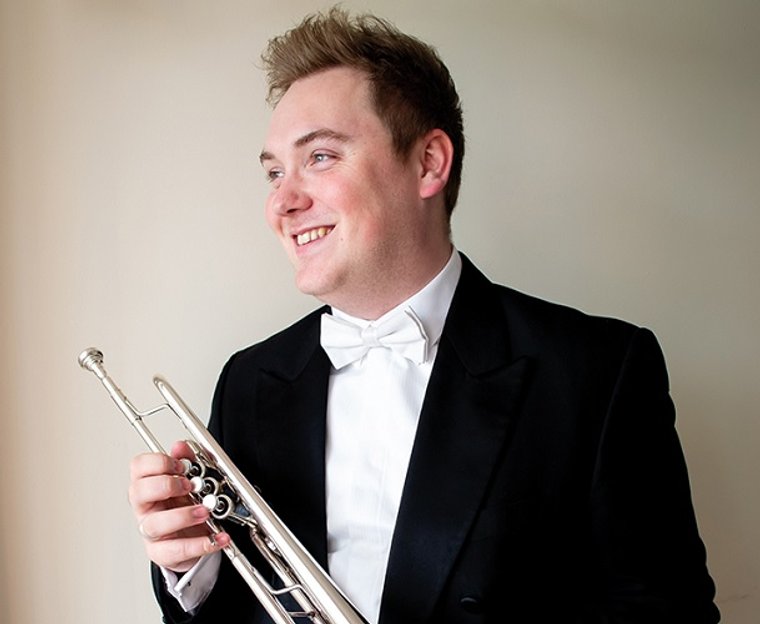 With both parents being brass musicians, there were always instruments to hand and it was no surprise that at 3 years old James was playing his first notes on the cornet.

James received his first cornet tuition from his father, before joining the Kettering Young Peoples Band at The Salvation Army. Later James became a part of the highly respected Northamptonshire Music & Performing Arts Trust (NMPAT). During this time he led the Youth Band for several years, being featured as a regular soloist. At 14 James joined the National Youth Brass Band of Great Britain under the direction of Bramwell Tovey and sat principal cornet of the band for 8 consecutive courses.

From 14 years of age, James was the Principal Cornet with the very successful Virtuosi GUS Band for 3 invaluable years of guidance from John Berryman, the conductor of the band at that time. In 2011, aged just 17, James was appointed as Principal Cornet of the world famous Grimethorpe Colliery Band. Whilst a member of Grimethorpe James performed all across the UK and was a featured soloist on the band's high profile, sold out tour of Australia in summer 2011. Leaving the band in 2012, to study trumpet in London, has enabled James to return to GUS.

He reluctantly relinquished his position as Principal Cornet with GUS in 2015, due to professional commitments. However he was delighted to pass on the 'hot seat' to younger brother Thomas.

James studied at the Guildhall School of Music and Drama from 2012-2015, under the tuition of Paul Beniston of the LPO, Paul Cosh, Steve Keavy, Will O’Sullivan as well as having established tutors such as Paul Mayes, Anne McAneny and Chris Deacon as members of his teaching staff.

In November 2014, at only 20 years of age, James was appointed as the Principal Trumpet of the Royal Philharmonic Orchestra. Alongside regular performances across the UK, the orchestra has an intense schedule of touring throughout a season including regular trips to China, USA and Europe and a wide range of recording projects. With the RPO, James has been fortunate to world with some of the world's leading conductors such as Charles Dutoit, Tadaaki Otaka, Pinchas Zuckerman and Vasily Petrenko.

James maintains a busy schedule outside of the orchestra. As a soloist, he has performed around the world in Australia, Canada, Asia, South America and all over Europe. In April 2015, James returned to the National Youth Brass Band as guest soloist on their Easter course working again with Maestro Bramwell Tovey (Vancouver Symphony Orchestra).

As a chamber musician, James has performed with groups such as the highly regarded SuperBrass Ensemble, Septura and the Onyx Brass Quintet, as well as being a member of the Bold as Brass Quintet.

In August 2015, James was a featured soloist with the RPO at the BBC Proms, performing Aaron Copland's 'Quiet City' and in 2020 he was appointed Principal Trumpet of the London Philharmonic Orchestra.

James is a featured artist for Geneva Instruments, performing exclusively on their 'Cardinal' Cornet as well as there 'Symphony' Bb Trumpet.