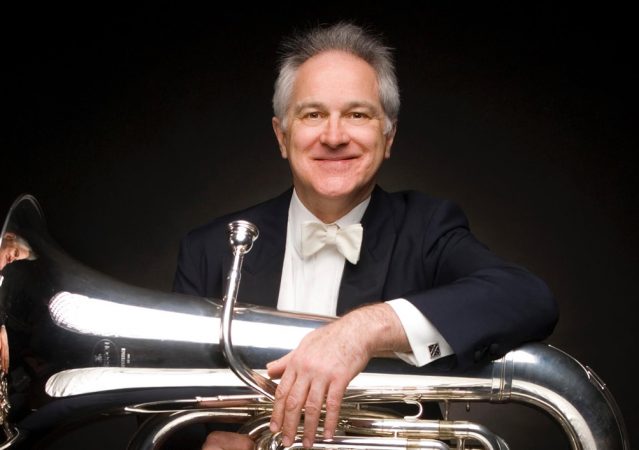 James Gourlay was born in Scotland where, at an early age, he was volunteered to play in the local school brass band. He made rapid progress and soon became Scottish National solo champion at junior and senior levels.Gourlay later studied tuba performance at the Royal College of Music, London, but left after a short time to take up a full time position in the City of Birmingham Symphony Orchestra. Three years later, he became principal tuba of the BBC Symphony Orchestra in London.It was in that city that Gourlay became involved with the Philip Jones Brass Ensemble, sharing the tuba chair with John Fletcher. At that time, he was also active in the film industry, performing on the sound tracks of Superman II and III, Batman and Yentl, to name but a few.

After 10 great years at the BBC, working with some of the world’s greatest conductors, Gourlay was invited to become the solo tubist of the Zurich Opera House Orchestra in Switzerland. It was there that he developed his skills as a conductor, attending master-classes with Ralph Weikert, and working with the Brass Band Berner Oberland, with which he won the Swiss National Championship 5 times and the Swiss Open Contest 4 times, record that has yet to be beaten. After nine years at the Zurich Opera, Gourlay was invited by the Royal Northern College of Music in Manchester, England, to become the Head of its Wind, Brass and Percussion department, following in the footsteps of Timothy Reynish. Later, another invitation, this time from the Royal Scottish Academy of Music and Drama, took Gourlay back to his native Scotland, to become Deputy Principal (Music) of that institution.

Today, James Gourlay is the General Director of Pittsburgh’s own River City Brass, the world’s only full-time professional brass band, performing 70 concerts annually all over the USA, and Director of Instrumental Music and University Bands at Wheeling Jesuit University, West Virginia. Gourlay holds a Doctor of Musical Arts degree from the University of Salford, a MMus from the University of Leeds and is a Fellow of the Royal Northern College of Music (FRNCM) and the London College of Music (FLCM). Gourlay has also been honoured by the Worshipful Company of Musicians, which conferred upon him the John Henry Isles Medal for services to the brass band movement.Gourlay’s repertoire is extensive, ranging from the avant-guard to rock and pop music. He has commissioned more than 50 solo works for tuba and piano, tape, band and orchestra. As a conductor, he works with some of the world’s leading brass groups, but also with orchestras such as the Sinfonica in Campinas, Brazil, the Orquestra Casa da Musica in Porto, Portugal. He is a regular guest conductor of the National Youth Wind Orchestra of Great Britain (NYWO), which he will tour Switzerland in the Summer of 2013. He has made 5 solo CDs, including the acclaimed ‘British Tuba Concertos’ and more than 20 CDs with brass bands and wind bands.